Holidaying between the Alps and Lake Chiemsee 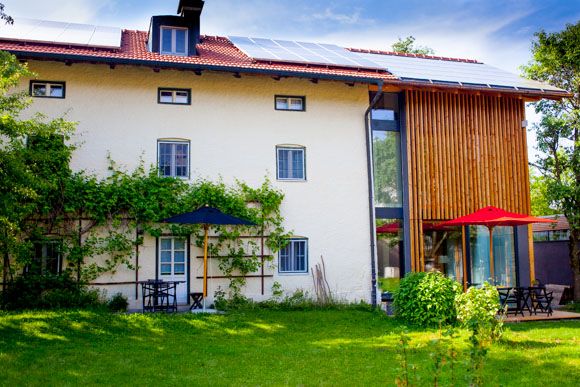 The old outbuilding dating back to the 18th century belongs to a large farmhouse. The old structure has a special charm and is made of river boulders, large stones that were used to build the walls back then. The timber roof structure up in the hayloft has been exposed and the old timber floor boards have been sanded down. There are three holiday flats in this house.
In 2013, we expanded. The new extension was added to the old outbuilding and is only separated by a strip of glass from the rest of the house. The former outer wall has been preserved and now makes up the new inner wall between the old outbuilding and the two new holiday flats.

We would like to offer our guests an atmosphere beyond the Bavarian lederhosen and are trying to bring together a plain design with modern holiday architecture and a cosy environment. In addition, the superior facilities will make your holiday even more enjoyable.

All holiday flats are equipped for 2-4 people and feature Wi-Fi (DVDs & AppleTV in some) and a dishwasher. A washing machine is available centrally for everyone. The holiday cottage is a former outbuilding belonging to a farmhouse dating back to the 18th century.

For those who dont fancy making breakfast during their holidays, there is the Café Obermaier (300 m as the crow flies).